If you're looking for a program to keep your system time accurate, you've just found it! 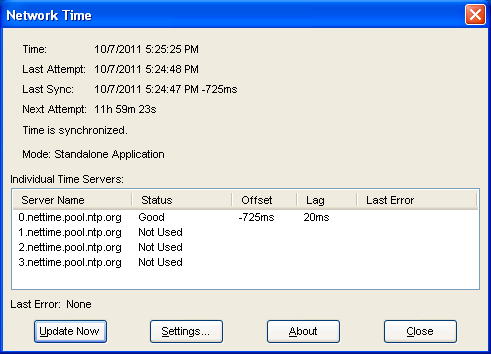 Its main attributes are:

NetTime was originally written by Graham Mainwaring in 1997 with an open source release made in 1998. Graham made a number of updates to the program until he lost interest and finally abandoned the project officially on the 1st of July 2004.

The NetTime project has been resurrected by myself, Mark Griffiths, and I'm now making an updated version available here:

If you find NetTime useful, please consider making a donation to show your appreciation and to encourage further development of NetTime!

Note: When upgrading from a previous version, you will need to shut down both the NetTime Service as well as the Tray Icon before running the installer. If you uninstall the old version first, you will need to restart your computer before starting the new installer.

NetTime is failing to sync - it reports that all servers failed: The most common cause of this error is that a firewall is blocking the Network Time Protocol (UDP Port 123) between your system and the servers that NetTime is attempting to use. It's not always obvious that a firewall even exists as they generally allow regular web traffic to pass normally. If you have temporarily disabled all firewalls that you know of and continue to have this problem, then it's almost certainly a firewall that you aren't aware of. If you can run a UDP traceroute to port 123 on one of the time servers that you're using, that should give you an indication of where the firewall is located.

NetTime is failing to sync - it reports that it had "Inconsistent responses" If there is a large time difference between the local system and the time returned by the time server, NetTime will automatically check with a secondary server to ensure that the time that it has received is actually valid. If it can't find a unique secondary server that provides a time which is a close fit to the time returned by the primary server, it will fail with "Inconsistent Responses" The most common causes for this is if multiple servers are configured but point to the same IP address, or you're using the default servers and you are in a region with only 1 actual server in the NTP Pool. Possible solutions are to either remove all but one server address - in which case, the time returned by it will always be used - even if it's invalid, or change your servers - if you're using the NTP Pool servers, then you should point to the servers for a larger geographic area.

NetTime is syncing, but the time is out by an hour - e.g. Daylight savings time isn't be honoured correctly: NetTime works internally with UTC (Universal Time) and doesn't have any code for handling daylight savings or time zones. As long as Windows is configured correctly, it should automatically handle daylight savings changes for you. If Windows isn't handling it correctly, it most likely needs to be updated. You can also manually your time zone information using the free Microsoft tool: Windows Time Zone Editor tzedit.exe Alternatively, the Windows Server 2003 Resource Kit Tools reportedly includes a command line timezone.exe tool for advanced users.

I have configured NetTime to provide time to other systems, but it's not working: Ensure that the Windows Time Service is disabled along with any other NTP servers that may be running. Also, make sure that the Windows Firewall, and other firewalls, aren't bloicking the incoming connections to NetTime.

What does Offset mean? Offset is the time difference between the local system time and the time returned by the time server.

Can I configure NetTime to use a proxy server? Unfortunately, the Network Time Protocol doesn't support the use of proxies, so that isn't an option and there isn't anything that I can do about this - sorry!

I have a problem not listed above: If NetTime isn't working correctly for you, please enable Debug level logging, attempt to do another time sync and then send an email to me with your log file attached along with a detailed description of the problem that you're having.

Most settings should be fairly self explanatory, however some people have asked for clarification on certain settings:

Max Free Run: Indicates how long the program will run for without getting a valid sync before it considers the local time to no longer be accurate. Once this time period expires, the tray icon will change to a cross and if it's configured to act as a time server, it will stop responding to requests for the time.

If Time adjustment greater than: The default setting for this means that the local time will be updated regardless of how much difference there is between the current local time and the time reported by the remote server. There shouldn't normally be a reason to change this as the current version of NetTime will check with multiple servers to ensure that it isn't using an invalid time.

Always provide time: Enabling this option isn't recommended. Normally, NetTime will only provide time to other systems if it is configured to do so and it has successfully synced to an upstream server. If you enable the option to always provide time, you may find that it will give out invalid time to any systems that connect to it!

You can quickly install the client by running the above installer with either the /silent or /verysilent command line switches.

If you want to preconfigure settings that are different to the defaults, they are stored in the registry under:
HKLM\Software\Subjective Software\NetTime

On 64 bit systems, the above location is remapped to:
HKLM\Software\Wow6432Node\Subjective Software\NetTime

Despite the amount of work that has gone into this updated version, most of the credit for it still lies with Graham Mainwaring.

The latest version of NetTime was compiled and tested with Borland Delphi 7 Professional. Earlier versions have also been tested to compile successfully with the Personal Edition of Delphi 7 - if you would like to get into Delphi and make changes to NetTime, you might be able to still find a copy of Delphi 7 Personal Edition that you can download if you do enough searching. Alternatively, you can try using the latest trial version of Delphi available from Embarcadero.

If you discover any problems with this version or would like to make a suggestion, please contact me:

Of course, as this is free software, I can't give any guarantees as to when (or even if) any feature requests will be incorporated into a future version - unless you're wanting to pay for it of course! If you have a programming project that you would like me to work on for you, you're certainly more than welcome to contact me!

NetTime, like most SNTP clients, will generally sync your system time to within 100 milliseconds of the correct time - often within 10 milliseconds. Of course, the accuracy is highly dependent on the accuracy of the server that it is connecting to - This updated version of NetTime has improvements included to try to ensure that even a badly inaccurate time server won't put the system time out - more information about this is included under History & Other Notes at the bottom. Asymmetric latency (Network delay which takes longer one way than the other) can also have an adverse impact on time accuracy.

SNTP clients resync the system time at regular intervals - between these time syncs, the system will be allowed to run at its normal speed which may mean that it runs either fast or slow - gradually putting the system time out until the next sync takes place. The speed at which the system time deviates from the correct time depends greatly on the system hardware and also to a certain extent what software is being run. Most PCs gain or lose a few seconds each day, however I've seen a system that loses 9 seconds per hour - more than 3.5 minutes per day!

The vast majority of users should find that NetTime more than meets their needs, however if you have specific requirements for very accurate time, I recommend that you investigate installing a full NTP client. Although you can set NetTime to sync more frequently to compensate for an inaccurate system clock, this isn't really recommended because of the greater strain that it puts onto the public NTP servers. A full NTP client has extra features to ensure better time accuracy (normally well below 10 milliseconds even between time syncs) by adjusting the rate that the system clock runs at. If you are administering a large number of PCs for an organization, it's also recommended that you configure a full NTP client on your network and have the rest of your systems sync to it with an SNTP client - this reduces the load on the public time servers even further as well as ensuring that all systems are in sync with a single time source.

Part of the apparent reason why Graham abandoned the NetTime project was because Windows 2000 and XP already include an SNTP Client and a free download was available from Microsoft for Windows NT. Graham characterized the Microsoft NTP client as being full featured, however, I strongly disagree with this - I would call the Windows SNTP client very basic - the user interface has only 2 features - allowing the SNTP server to be changed and a button to attempt an immediate sync. The Microsoft SNTP client does have more features available, but they require manual editing of the system registry - something which most users are understandably reluctant to do. In the end, even with editing the registry settings, the Microsoft client is still just an SNTP client with the limitation of being able to sync with only a single remote server.

Like the vast majority of SNTP clients that can only sync with one server, (and also most of the remainder that only have backups for if the primary server fails completely) the Microsoft SNTP client has a major problem when it receives a reply with a vastly different time to what is currently set on the system - the software simply has no way to know which is closer to being correct - either the system time could be wildly inaccurate (e.g. because the CMOS battery has failed) or the answer from the server could be wrong (either accidentally or maliciously.)

NetTime ensures that it is not setting the system time to an incorrect value by always checking with a second server (when configured) if the time adjustment is more than 10 seconds. Short of a major bug in the program design or a very sustained attempt to maliciously skew the system time by a rogue time server, NetTime simply won't set an invalid system time!